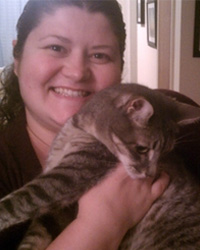 September 21, 2011
Carina Pologruto and her beautiful cat Hemi exemplify our mission at One More Smith. A consistent contributor and successful adopter, Carina gave a second chance to an animal that due to deformity would have been destroyed. Here is how Carina describes their life together today since adopting Hemi on June 6, 2010.

“Hemi is polydactyl with five extra toes in total, so I named him for Ernest Hemingway, who took in polydactyl cats. Hemi is a whirlwind of energy, love, and paws. He’s as adventurous as he was the day I picked him up from OMS. He’s never afraid of new people and marches right up to them to see just who has walked into his house. He’s a problem solver who has learned to pick up pens and pencils with his extra toes. He even makes tiny furry fists and knocks on doors! He also has a hidden talent of tightrope walking (AKA the metal banister of my stairs).”