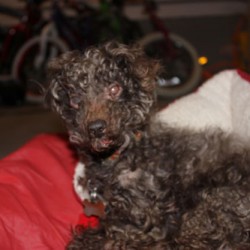 Meet Brownie, a resident of One More Smith for 10 years who is now 19. Today, Brownie has lost his sight and his hearing is starting to go as well. However, he is safe and in the comfort of his surroundings at One More Smith with everything he needs close by. Brownie was abandoned at a bird store where he was kept in a small bird cage. He has separation anxiety and when he was checked out by a veterinary, we learned that all of his legs had been broken in the past.

For a little man, Brownie has lived large at One More Smith. He has always demanded the best, and he deserves it.